You are here: Home / Blog / Uncategorized

A big project has just come through.  We are going to need everyone to pull together to make this dream a reality…

For over a year we have been supporting a crèche called Qalakahle ECD Centre.  It is a non-profit organisation that was formed by two dedicated ladies in the Mansell Market area of Durban.  They are trained preschool teachers who have given up their ability to earn descent salaries to serve the market sellers by taking their little ones in during the day.  This prevents the kids from going missing or being run over in the streets in front of the stalls.  It also allows the moms to trade and source their raw materials without worrying about their little precious children.

About a year ago the Health Department wanted to close them down due to them not meeting requirements.  The only problem is it really is an essential service in the area, so with a bit of pulling strings and plenty of clean up and assistance we were able to keep them open.  Since then we have been looking at ways of providing them with an appropriate facility.

A number of months back Headway pre-primary school (Durban North) approached us to find out if there was a way they could get involved and we introduced them to the Centre.  They have been aiding in upgrading much of the educational materials at the school and have raised some money to go towards bettering the facility.  This money started the ball rolling in allowing us to petition the Ethekwini Municipality to provide the land for an appropriate School facility at Mansell Market.

Today it has come through in writing! We have the land… its time to build a brighter future for these kids!

Anyone interested in joining in on making this facility the best it can be please contact us! We need skilled people, finances to buy items, jungle gyms, sleeping mats, kitchen and bathroom items (both fixed items and utensils), paint, hardware items… pretty much anything and everything you can think of…

We are so excited for the possibilities here. 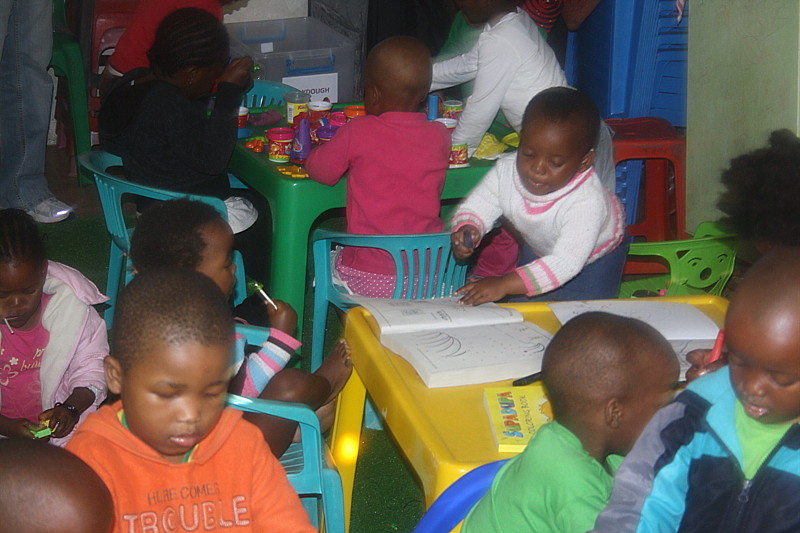 What an uplifting experience!! From the time we arrived many of the kids seemed more hungry for our attention than for the meal on offer. Some of the kids assisted with the preparation of the meal while one of the kids proudly gave us a guided tour of the facility. The kids are split by age but the surfing culture among a lot of them transcends that. Surfing is an integral part of their life to the extent that the “fix” they get from surfing has replaced anything that they were on before that. The meal of hotdogs seemed to be enjoyed by all and the ice cream dessert was a real hit. This was followed by some games in the communal area which was a real giggle as they had to blow a ball around attempting to score while having their hands tied behind their backs. One of our Life Group members had her class make some cards up to distribute together with a small toy. For me, this was the most special part of the evening as each card had affirmation messages like “I love the way you surf”, “God loves you”, “I am your friend” and so on. The joy shown by the kids as these cards were shared with them and, in some cases, read to them was tangible. These kids have almost nothing and it’s a very humbling experience being in their company and witnessing their joy at the little things that we often take for granted. As our time with the kids drew to a close, the excitement spilled over into some impromptu dancing with each of them trying to outdo the others moves.God bless these children and may they continue to grow as individuals.

Thank God for Children, honestly children can communicate with other children so easily; no matter what the age, gender, race, even language! All they know what to is how to play with each other, so simple. I need to take a feather out of their cap, to understand and communication better. Firstly my son walked into the boys dormitory and yelled out “it smells in here!” (How do you tell a four year old not to say that and explain its rude!?) Secondly he said to me and said “Come look mom there’s a mouse!” Obviously in my mind, I’m thinking Micky Mouse pillow case, oh no I was abruptly corrected when an actual mouse ran across the room. To Lawson this was amazing, a “pet” to follow around. The evening was entertaining and so much fun. I especially enjoyed watching my children play with the Umthombo boys and girls, they cried the whole way home, asking to go back and play with (in their words) all the “umtommy children”

People like Tom Hewitt and the big African man and Volunteers who help run Umthombo are heroes. It was intimidating walking into a building that you are unfamiliar with especially one that is occupied by people that are publically known as unstable and outcasts. We arrived our friend’s children, Lawson and Layla, who were highly spirited – a lesson already learnt. There was some ice that needed to be broken and with the love that we brought through the doors, it quickly melted that. There was a lot to talk about at the end of the evening…..A child teaching us to play the bongo drum, letting us explore through their upcycled surfboard quiver, showing us there proudly home grown veggie garden, meeting Boy Boy the garden security guard, the local lightning speed rat. Teaching us all that we need to change our perspective sometimes and just love a little more.

When I heard we were going to Umthombo I was excited, I love kids, I was keen to play around and have some fun! However when I got there I realised these were the same street children I turn away at the robots, some dressed in just an oversized t-shirt, I was nervous at how they would respond to us. I couldn’t have anticipated a warmer welcome! Some came running to introduce themselves while others ran straight to my friend’s kids (2 and 4 years) who we had brought with us – they picked them up and swung them around, wanting desperately to play with their new friends. We were taken on a tour by one boy who showed us his bed and their impressive collection of second hand surfboards. They had wetsuits which were donated to them by O’Neill, which they kept in immaculate condition! You could tell the “surf room” was fulled with their prize possessions. After a few games of pool and dancing to the music on the TV we ate hotdogs and ice-cream which went down in a flash!

There was absolutely no hostility towards us only welcoming smiles, laughs and conversation, like any other 10-14 year old child, they were curious of us, wanted to play around and have a good time! When time came to go home, there were heartfelt hugs all round, they were sad to see us leave but with tummies full it was time for a well deserved, good night sleep. It as a humbling experience and I felt I had made a small difference, given those kids hope in some way. Hats off to the staff of Umthombo and Tom Hewitt, what a fantastic establishment taking children off the street into a home, with a lounge, kitchen and beds to sleep. Our prayers and support are with Umthombo, as they continue to make such a difference in those kids lives.

The first time we were told we were going to be serving dinner at the Nest, I was NERVOUS.

When I walked up the stairs, and into the doors, the nervousness intensified! What were these people like, what if they were dirty or try rob us? How nieve!!!

As we served dinner, home cooked Spaghetti Bolognese, we saw the people for what they really were, normal people who have had been knocked down by life circumstances.

While some members of my home group dished up grub, I made myself comfy in the dining room, and started chatting to an elderly couple. They were so interesting and friendly, with so many stories to tell. They, like others, had a plan to turn they’re life around and move out of the Nest. I don’t know if they ever will but they were hopeful and that was enough for me. The part that hit home was this couple was my father and mother’s age. They had children, and families somewhere.

Another gentleman works a full time job and the Nest is the only affordable accommodation on his salary. Others were there because on their minimal pension the Nest is their only option. These are real life problems, that have occurred to real people and could in essence happen to anyone.

I thoroughly enjoyed my fellowship time with the people I chatted to that evening. I was humbled by them and realised how ungrateful I have been in my own life.

I would recommend an evening at the Nest to anyone looking for a good company and conversation, an added bonus is the home cooked meal!

Is Christmas time really the seaon for giving?  Or is that just what we say knowing that the people we give gifts to are likely to give back to us?  Why not give something this festive season that literally changes lives. It is bucket drive time.  Olive Tree Church is selling buckets for R15 with a grocery list from which you buy the groceries. To prevent neighbourhood jealousy please buy all the ingredients on the list and the right quantities.  The complete list is about R200.  This provides some very desperate people with the basics (and a few luxuries) to see them through December.  Every year we are blown away by the responses of those receiving the buckets.  So challenge your work collegues, family and friends and see how many can be filled…

What does a bucket mean to the recipient?

Headway pre-primary school was introduced to Qalakahle ECD centre a couple of months back and decided they could make a difference in the lives of the learners at the crèche facility. Qalakahle ECD centre serves an underprivileged community in Durban. Giving the children a safe space to learn while their mother’s are freed up to try earn a living. Headway have decided that this would be their social give back and they have weekly collections of food, school consumerables and furniture which they drop off at the crèche making the environment in which these children learn so much more nurturing. Well done Headway!

Well done to everyone who braved the weather to go love a community. We had about 50 people come out. We got a house up just before the rain came down (so Zodwa and Japphat actually get to sleep tonight – their old place leaks so much that when it rains at night they can’t sleep!), 2 veggie gardens sorted out and plenty healings throughout the community.

See some of the images from the Big Build Below:

END_OF_DOCUMENT_TOKEN_TO_BE_REPLACED

We Are Durban Gallery